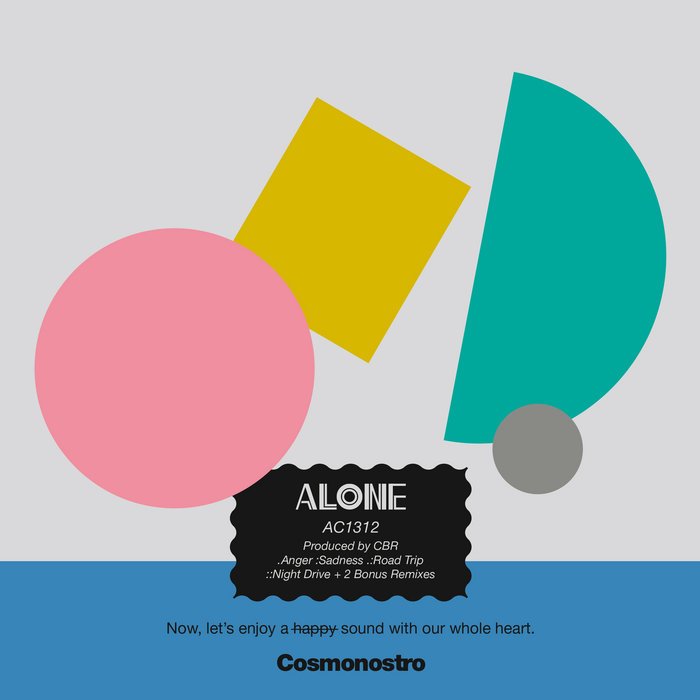 After giving us a taste of his talent with a blissed out rework of Sohn’s ‘The Wheel’ back in October, it was a no-brainer that Cosmonostro should unleash more of CBR’s beats to the world.
‘Alone’ showcases 4 original productions and 2 remixes from the young Parisian beatmaker, who demonstrates musical talent and understanding way beyond his years. From start to finish this record oozes soul, with laidback key melodies and drums that sound too human to have ever been sequenced by machines.
Opening track ‘Angry’ fuses testosterone fuelled beats and a nasty bassline with otherworldly found sounds to create three and a half minutes of madness you can file somewhere between Dibia$e & Four Tet. After a raging start CBR pulls it back a notch for the sultry soul of ‘Sadness’, which sets the cosmic mellow vibes that are more prevalent throughout the EP. Oozing synths, D’Angelo inspired keys and swung drums are the name of the game here, and the laidback mood flows over into following track ‘Road Trip’, introducing a bassline with serious punch and a key melody you’ll have lodged in your head for days to come. ‘Night Drive’, the final original production on the EP, demonstrates CBR’s finesse for sampling, with Fela Kuti & Erykah Badu chops meshing beautifully with original instrumentation as if they were meant to be there all along.
The two remixes that close off the EP show CBR’s ability to work outside of his comfort zone, introducing his own flavour to another artist’s production whilst retaining the core essence of the original, a task that he pulls off with style and swagger in his reworks of Goldroom & Sohn.
Los Angeles watch your backs, looks as though Paris is a new contender for world capital of beats!