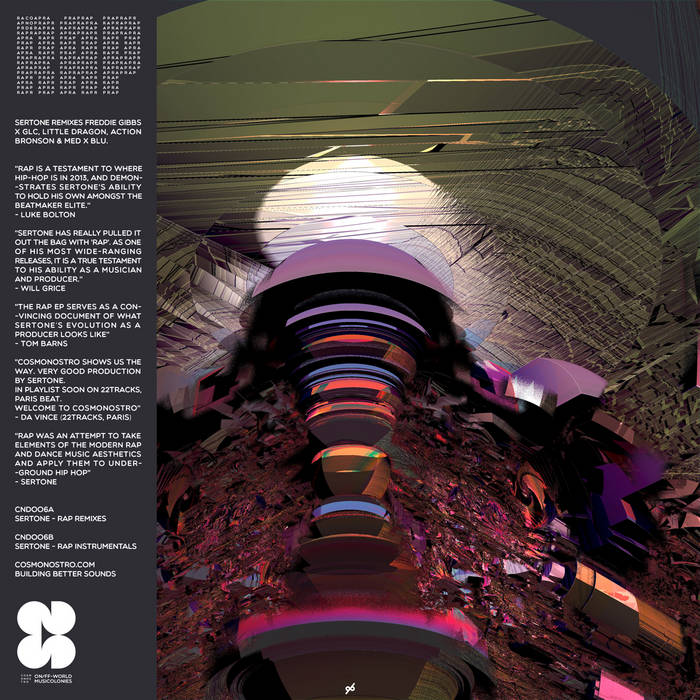 ''As an artist known for his predominantly instrumental work, RAP sees SertOne's reunion with rhymes. And a blissful reunion it is.

Each track showcases Sert's finesse as a remix artist, providing us with a unique take on a variety of styles, ranging from the synth-pop of Little Dragon to gully gutter rap courtesy of Freddie Gibbs.

Easing us in gently is his take on Little Dragon's 'Little Man', disposing of the original's bouncy pop rhythms in favour of a more ethereal ambient sound. Subtle manipulations to Nagano's distinctive vocals sit perfectly with the pulsing subs & synths, showcasing the attention to detail that makes SertOne's productions so absorbing.
Next in line is Action Bronson, whose brash swagger plays off the throbbing low-end and otherworldly samples of Sert’s revised beat, followed by the equally shameless rhymes of Freddie Gibbs, who receives a footwork edit reminiscent of his recent work under the CL Moons alias. Out-of-the-box sample choices give another mystical element to the beats, with Eastern European disco sitting alongside skittering 808 hihats and snares in a union few would have predicted possible.
Closing off the release is a rework of ‘Belly Full’ off the recent Madlib/MED/Blu collaboration. Attempting to revise a Madlib production is a daunting task for any beatmaker, but Sert takes a sharp turn away from the trademark jazzy tape saturation of Madlib’s beat & lays the rhymes over a much darker, club-oriented backdrop, where thundering low-end and sci-fi-esque arpeggios dominate.

RAP is a testament to where hip-hop is in 2013, and demonstrates SertOne’s ability to hold his own amongst the beatmaker elite.''